The Philosophy Department in Uppsala has played a prominent role in the history of Swedish philosophy and in Swedish society generally since the 17th century. Many of Sweden's most influential philosophers worked here, such as Christopher Jacob Boström, Axel Hägerström, Ingemar Hedenius, and Adolph Phalén: in the early 20th century it was the center of the so-called "Uppsala School" that had great influence e.g. in jurisprudence and that counted, besides Hägerström and Phalén, leading legal scholars such as Alf Ross, Vilhelm Lundstedt and Karl Olivecrona. In the second half of the 20th century the Department become very prominent in logic thanks to scholars such as Stig Kanger and Krister Segerberg.

Uppsala University has the national responsibiity for scholarship and teaching in Aesthetics, a duty ordained by the Swedish government. Together with the Faculty of Philosophy at Oxford University, the Philosophy Department is also the home of the British Journal of Aesthetics. 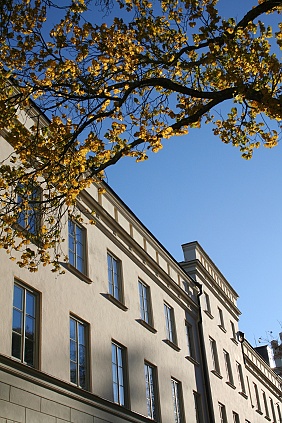